Russian artist Nikolay Polissky has created two massive sculptures called Beaubourg (2013) and Universal Mind (2012). Most of his sculptures, like these two, provide commentary on the affinity of nature, culture, myth and science. This is what makes him a creative genius.

Polissky uses materials from the natural environment and employs techniques from traditional cultures, like weaving. The result has always been an adventure into a world of myth or science, or whatever you can imagine.  🙂

It featured a huge sculpture with birch branches woven onto a 72 feet high metal frame, complete with stair in the middle and observation deck at the top.   Polissky hasn’t really explained the unusual shape and form of the sculpture.  Instead, he wanted the art-viewing public to come up with whatever they can imagine.

When asked by Calvert Journal, this is what he had to say:

“Think up a story yourself. The most important thing is the myth. Reality alone means nothing.”

All images courtesy of Nikolay Polissky, and are published with permisssion

To see more of his work, please visit his website: polissky.ru 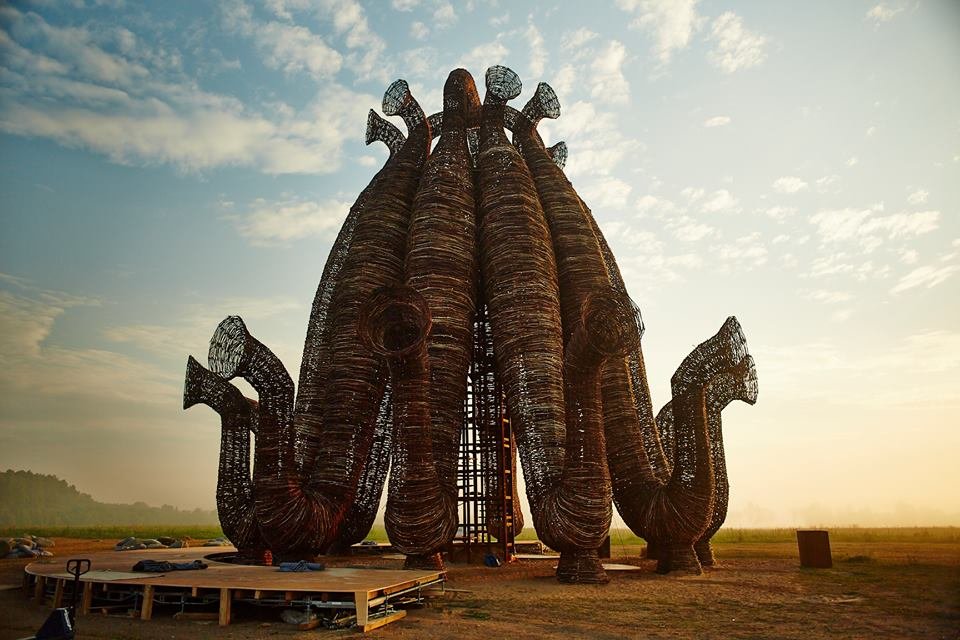 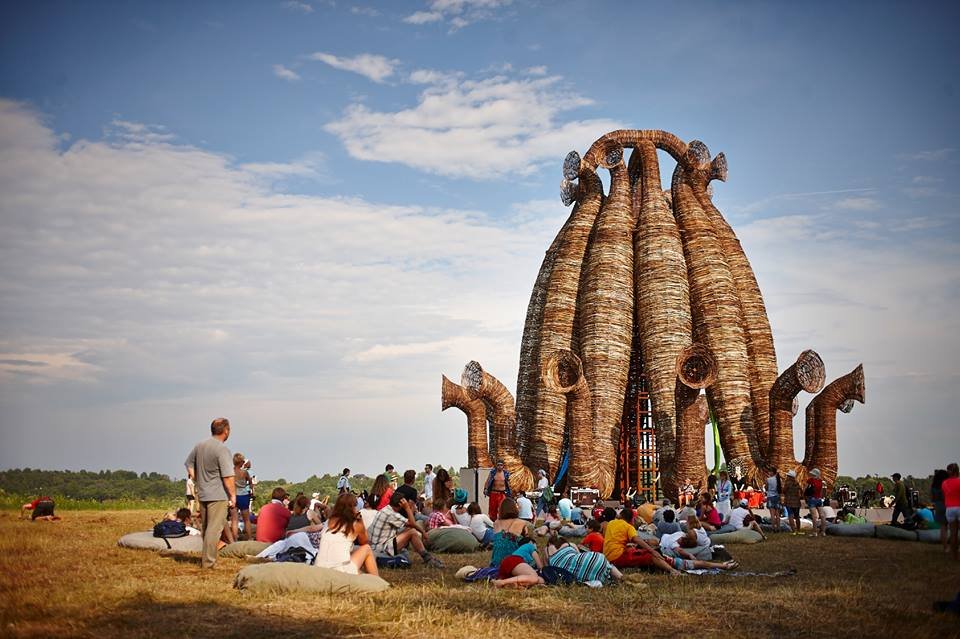 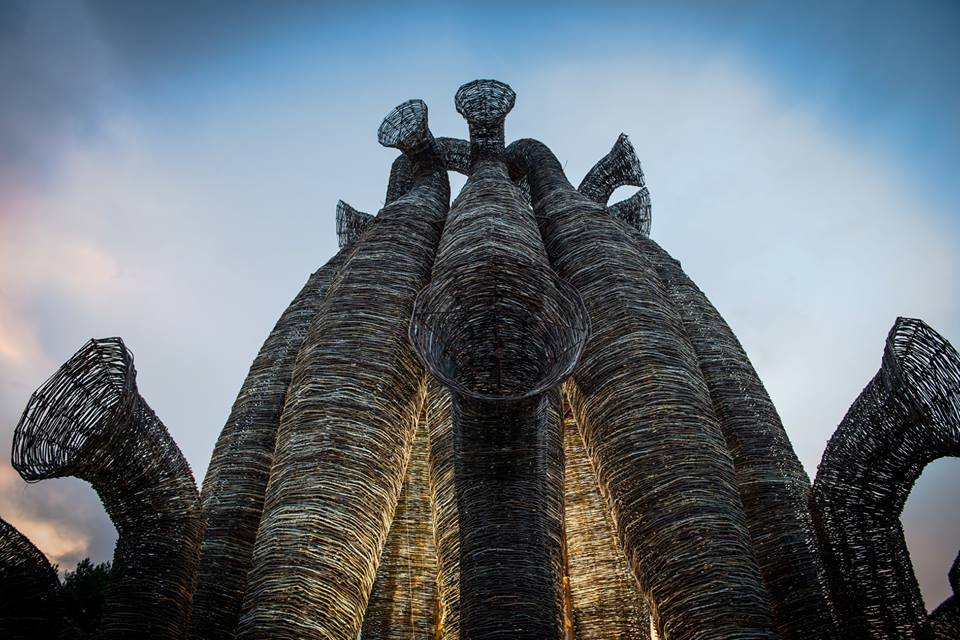 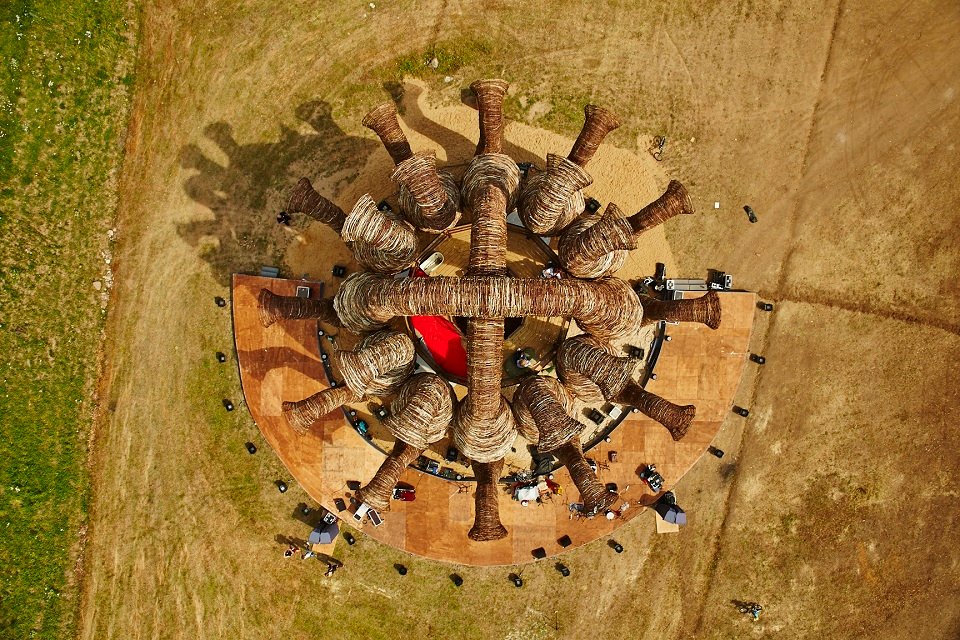 The Universal Mind was part of Polissky’s scientific sculpture series, along with ‘Large Hadron Collider’ (2009).  It’s a wooden sculpture fastened together by nuts and  bolts to create a sort of large mechanical brain.  At night it becomes alive as the billions of neurons in pulsating bright lights race to nowhere.  🙂 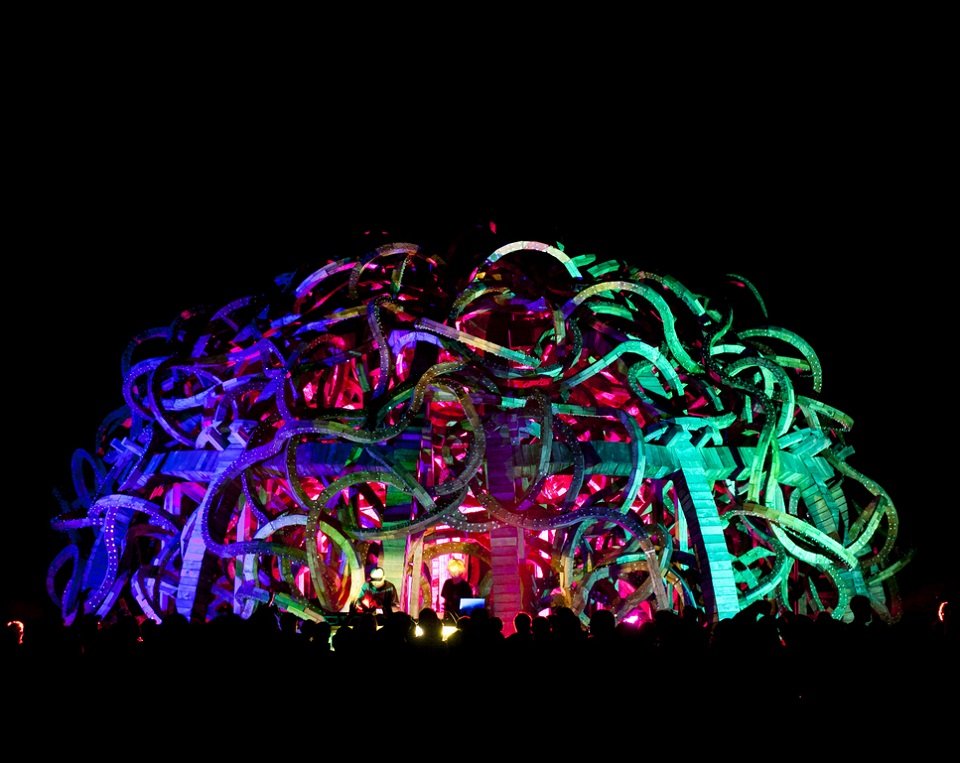 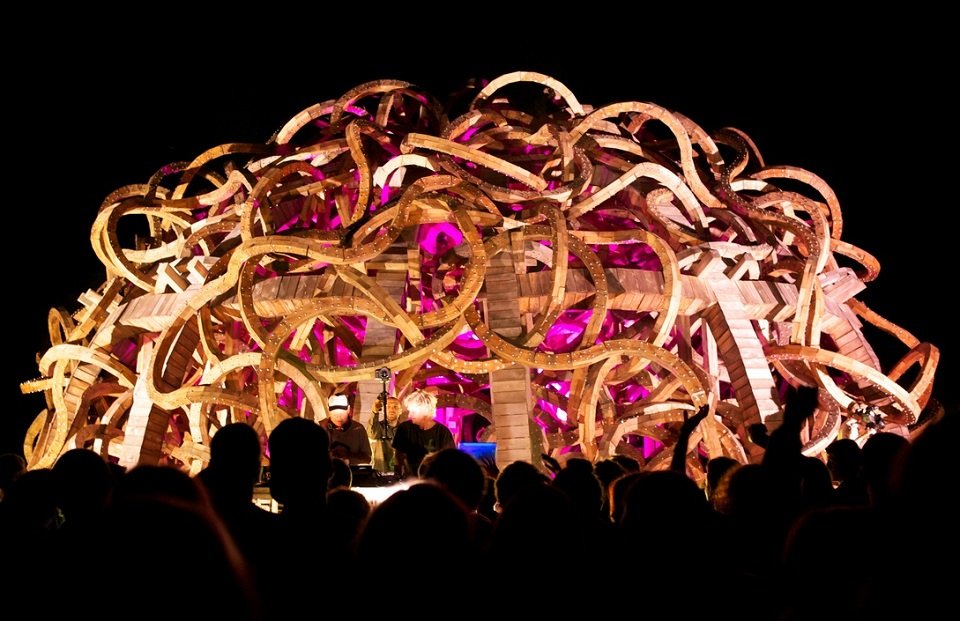 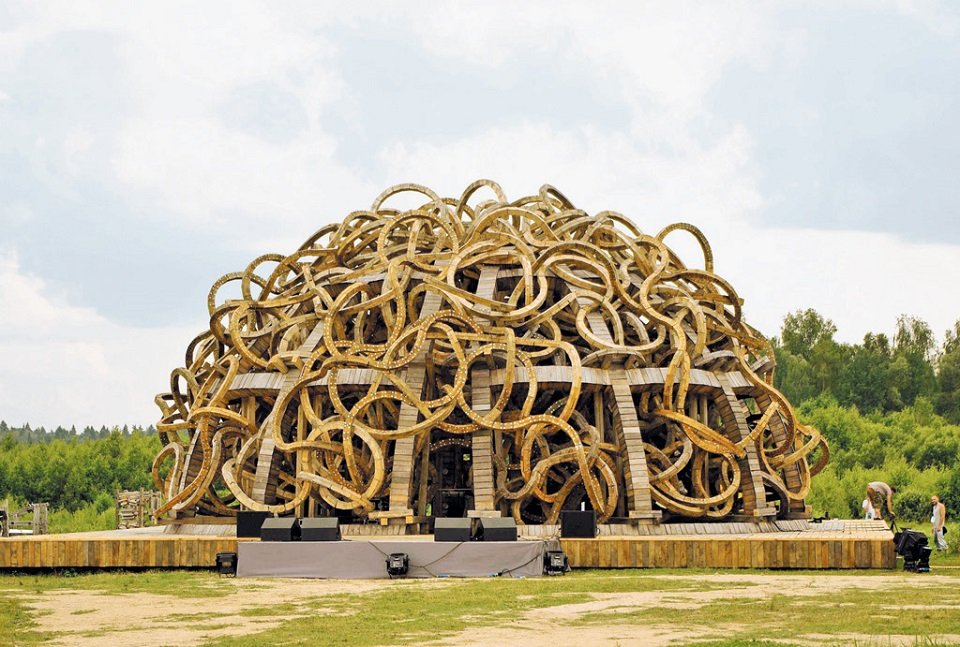 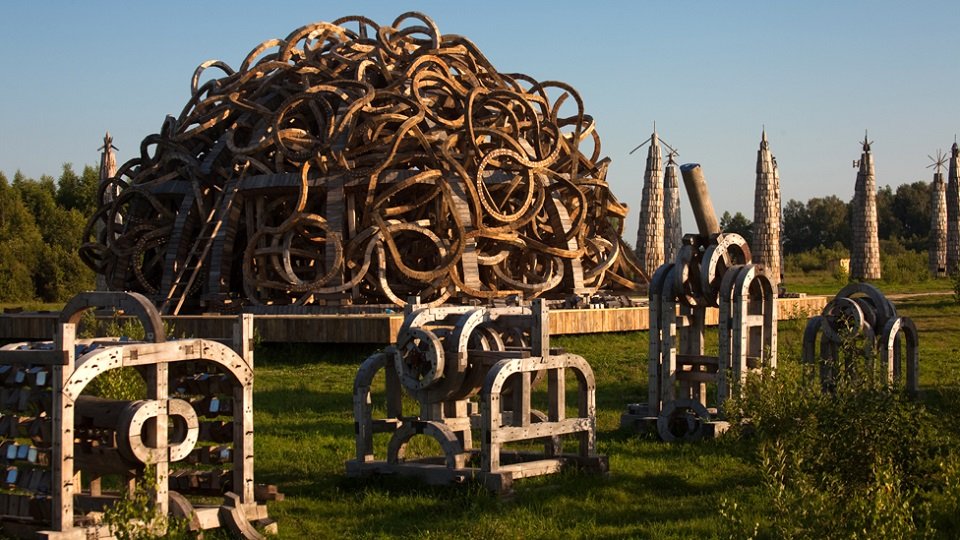 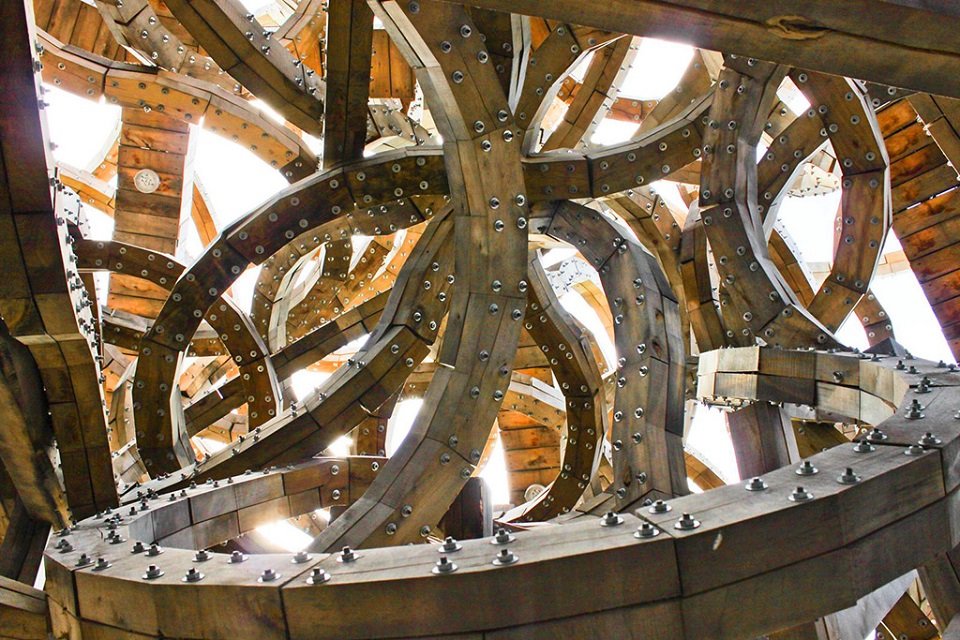 Colorful Portrait Quilts by Bisa Butler — meticulously crafted with amazing details
Incredible Portraits Made of Found Materials by Jane Perkins — creatively crafted to beauty and perfection
Joshua Smith’s Miniature Buildings — capturing the drab urban landscapes
The Human-Animal Hybrid Sculptures of Kate Clark — beautiful yet disturbing lifelike artworks
Robotic Sculptures by +Brauer — they look like harmless, cute and adorable aliens
Amy Genser’s Paper Coral Reef — capturing the natural beauty and wonder of the sea world
Malgorzata Chodakowska Creates Bronze Fountain Sculptures — capturing the beauty and grace of a woman
Jamie Salmon’s Realistic Human Sculptures — crafted in meticulous and impeccable details
Scenes: Fantastical Landscapes by Dorothy O’Connor — life-sized installations depicting dreamy scenes
Copyright MOMENTS Journal - All Rights Reserved
Back To Top
×Close search
Search
We use cookies to ensure that we give you the best experience on our website. If you continue to use this site we will assume that you are happy with it.OK